Travel itinerary for 10 days in Cambodia

Travel itinerary for 10 days in Cambodia

We cycled 11 kilometers through the countryside to the Wat Ek Phnom temple. Although this one is in ruins, the site also boasts a new modern temple which is still in use, a giant Buddha temple and an improvised swing with a car tyre.

In the evening we went to Phare Ponleu Selpak, a Cambodian non-profit arts school and an internationally acclaimed circus .

In the morning we took the rickety bamboo train, which is basically a bamboo platform placed on two axles and propelled forward with a small engine. The bamboo train picks up a surprisingly high speed as it zooms through the countryside. . No need to mention it’s not very comfortable (prepare for some bumps and bounces), but it’s so much fun! 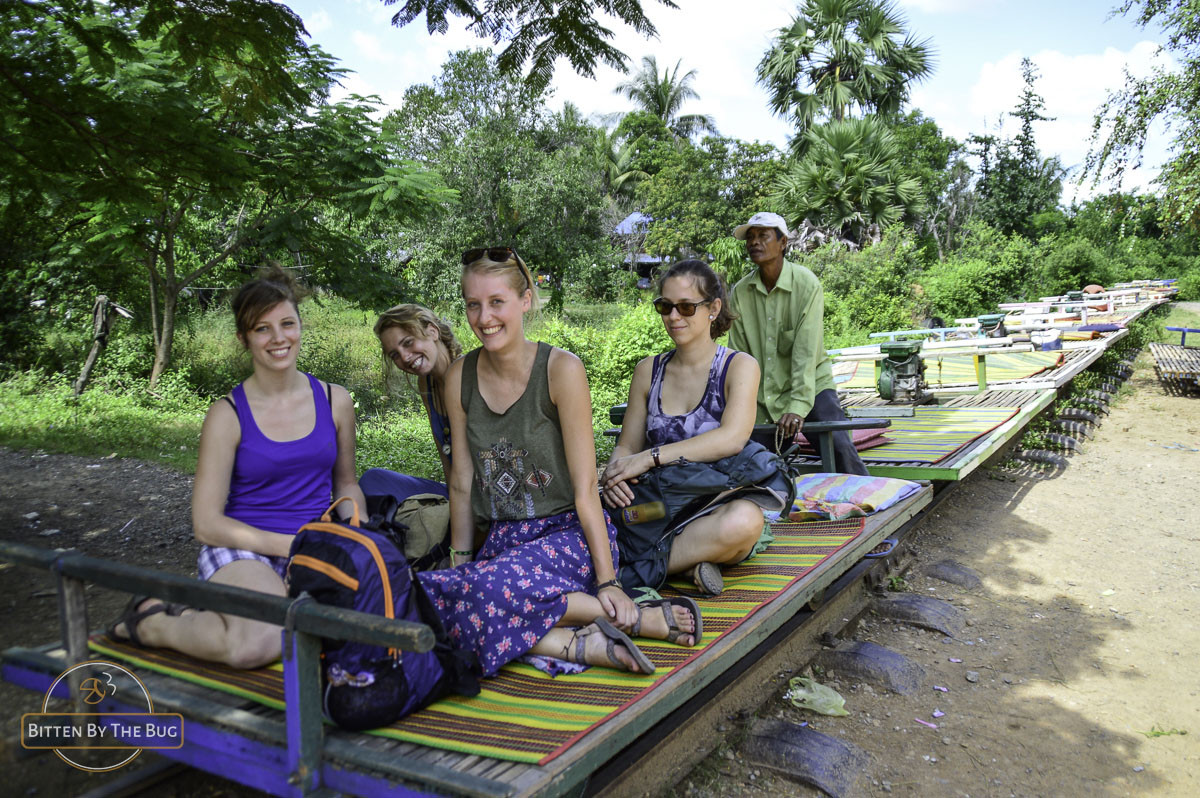 In the afternoon we took a tuktuk to Phnom Banan and the killing caves at Phnom Sampeu. This is actually a huge hill where the Khmer Rouge committed massive atrocities. A beautiful temple dominates the hill, from where we enjoyed a sweeping view over the area. In the evening, thousands of bats flew out of the cave and over our heads. This giant cloud of bats was one of the most fascinating experiences I’ve had in Cambodia. 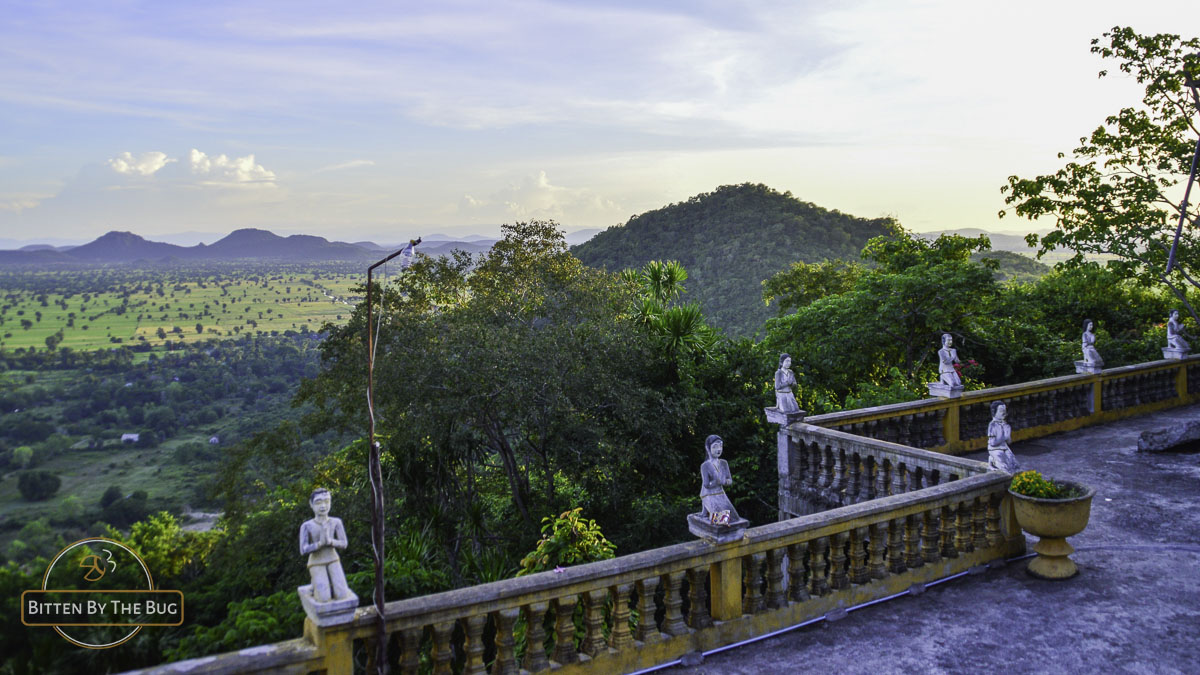 In Siem Reap, we spent most of our time exploring the enormous temple complex of Angkor Wat. It was a very intense experience, especially because we aimed at seeing both the sunrise and sunset from various viewpoints, and covered large distances walking and cycling. Only for the first day, we hired a tuktuk to visit one very distant temple.

On our first day, we hopped in a tuktuk and began in the afternoon by visiting the distant temple of Banteay Srei, which contains the finest, most intricate carvings to be found in Angkor. We climbed up the large flight of stairs of the Pre Rup temple only to end up somewhat disappointed with the view. Finally, we headed to the Srah Srang reservoir to watch the sunset. 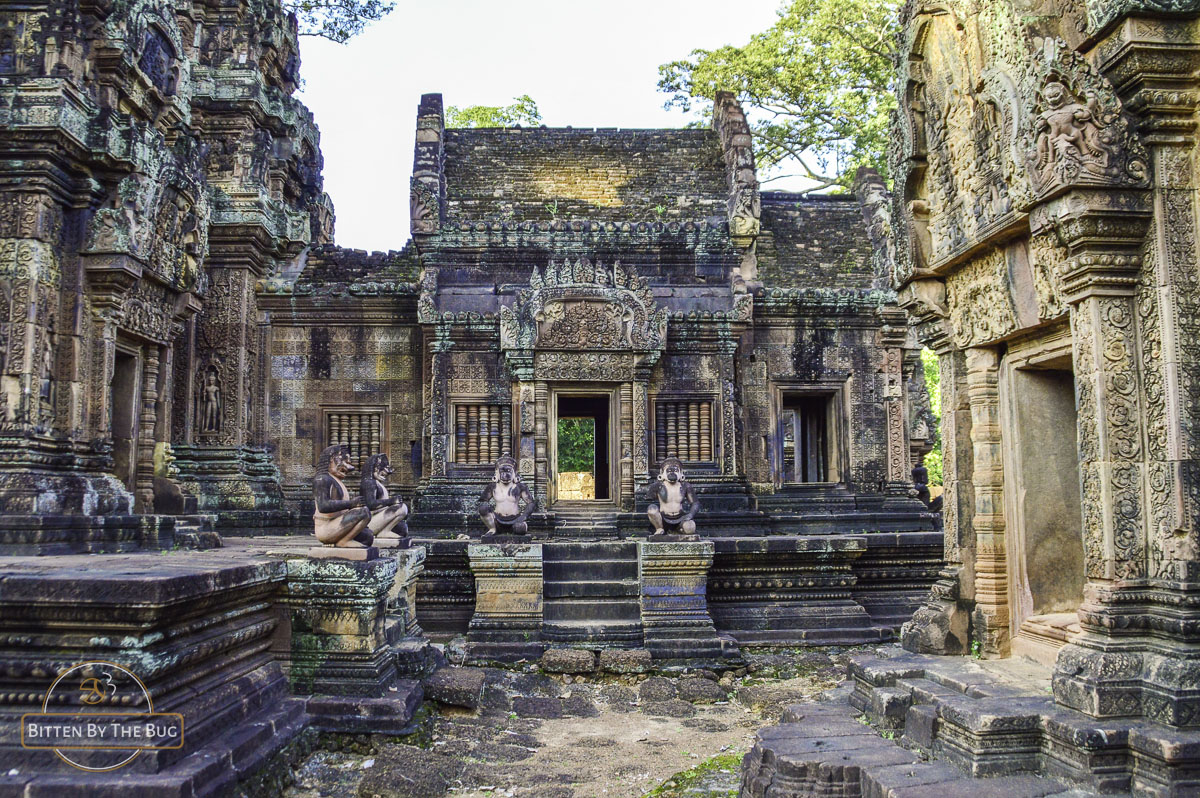 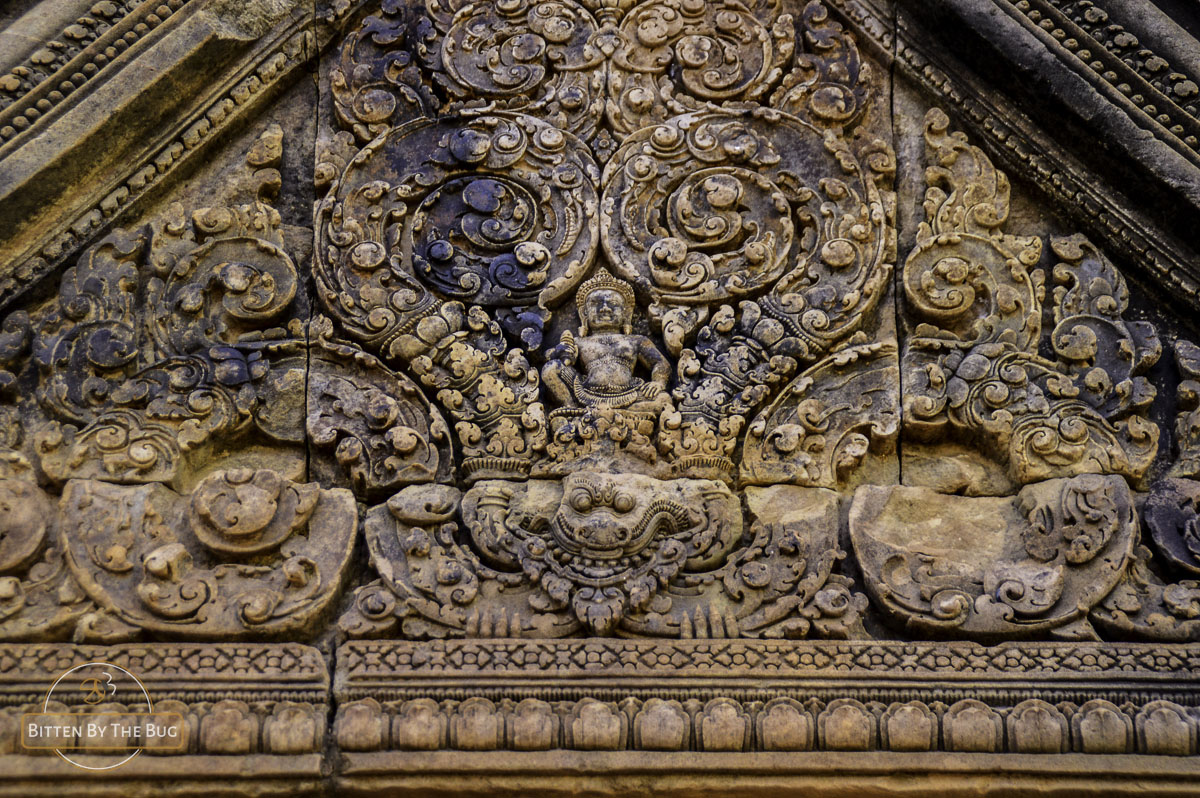 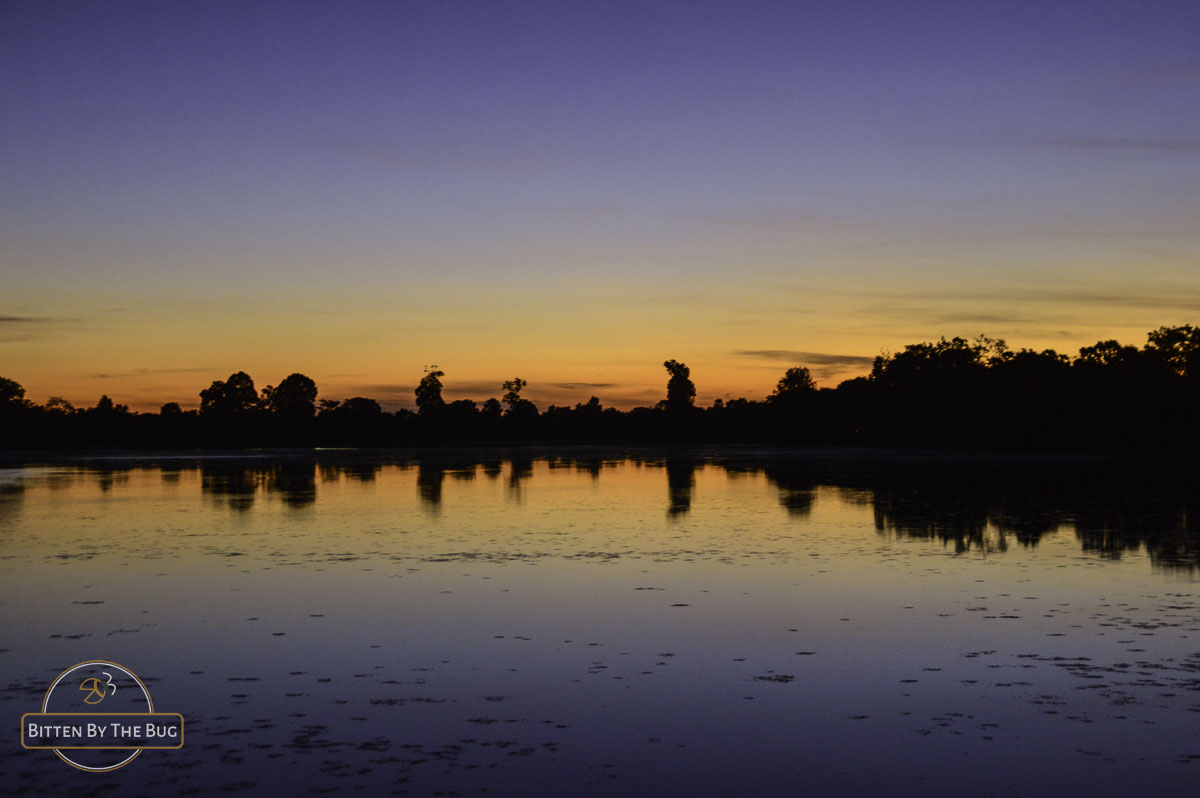 After watching the sunrise at the Srah Srang reservoir, we hurried to the Ta Phrohm temple (aka the Indiana Jones temple) to get there before the crowds do. 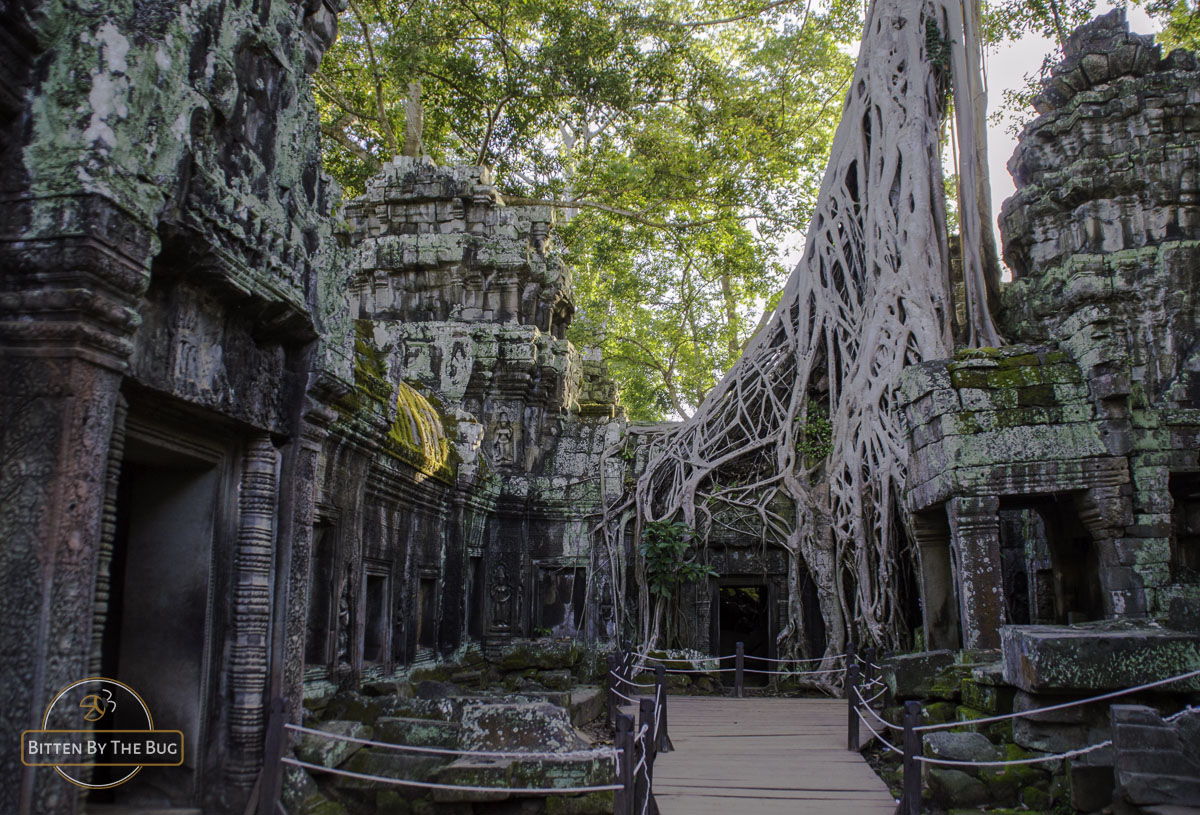 Neak Poun stood out as well because it is surrounded by water on all sides. Phnom Bakheng offered a stunning view over Angkor Wat in the distance. Around sunset, we headed to Angkor Wat, which was extremely quiet, but didn’t offer a particular sunset.

On our last day, we arrived early to watch the sunrise at Angkor Wat. Because of the crowds who eventually gather to do exactly the same, the moment had kinda lost its romance unfortunately. We spent the rest of the day visiting the temples within Angkor Tom, an almost square city dotted with countless temples. The most striking one is without a doubt the temple of Bayon, characterized by the immense smiling faces in stone. 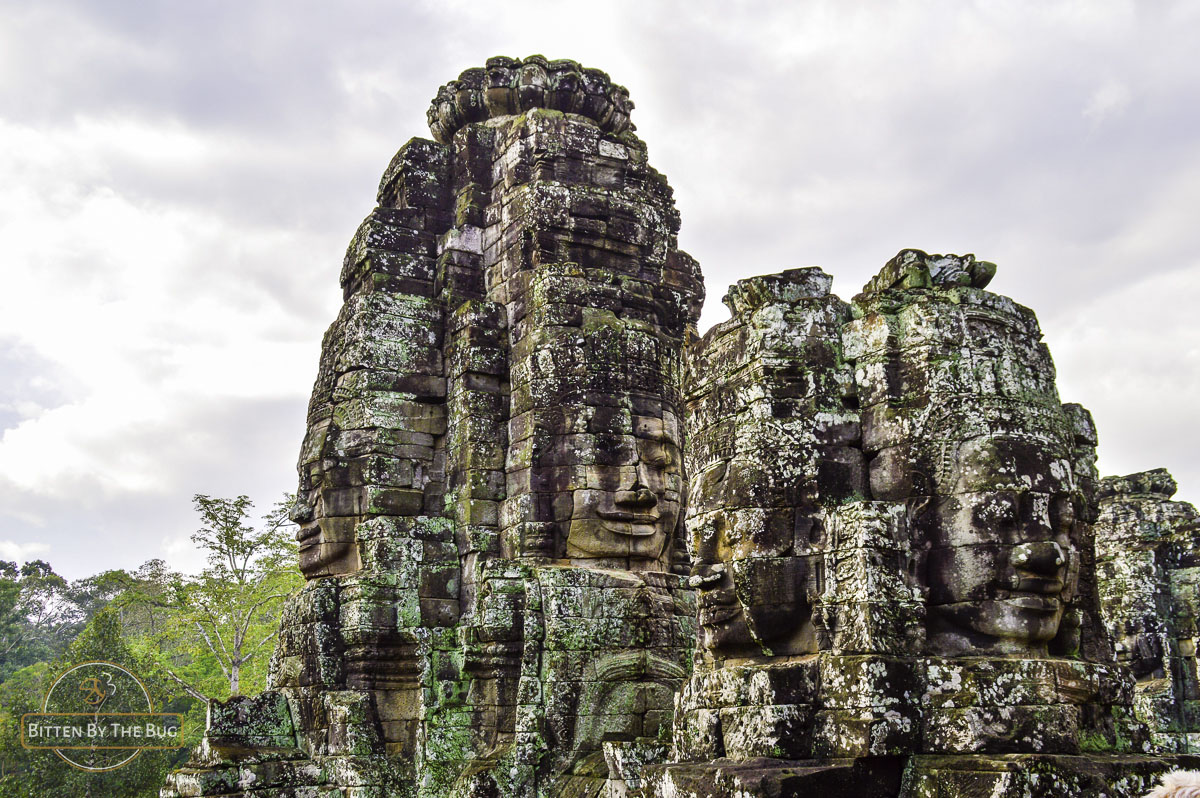 Angkor Wat and the surrounding temples are definitely a unique and mind-blowing site. Nevertheless, after day 3 of visiting temples all day long, I was suffering from a severe temple overdose. Time to move on!

You're expected to behave respectfully when visiting a Buddhist temple, so make sure you dress and behave properly.

We visited the Genocide Museum Tuol Sleng S-1, which is a former school that has been converted into Cambodia’s most important prison in 1975. In the afternoon, we headed to the Choeung Ek Killing Fields, where the Khmer Rouge killed thousands during their four-year reign of terror. We took an audio tour which contained several testimonials and made us very silent. 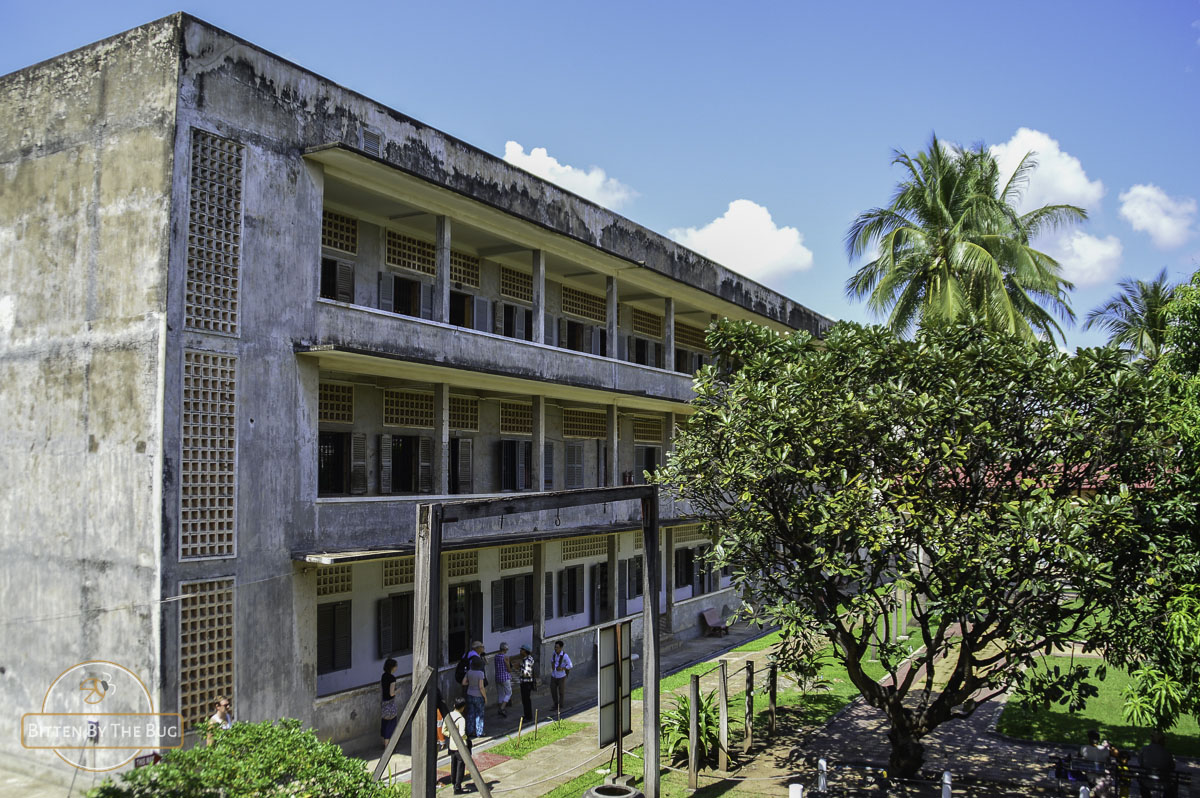 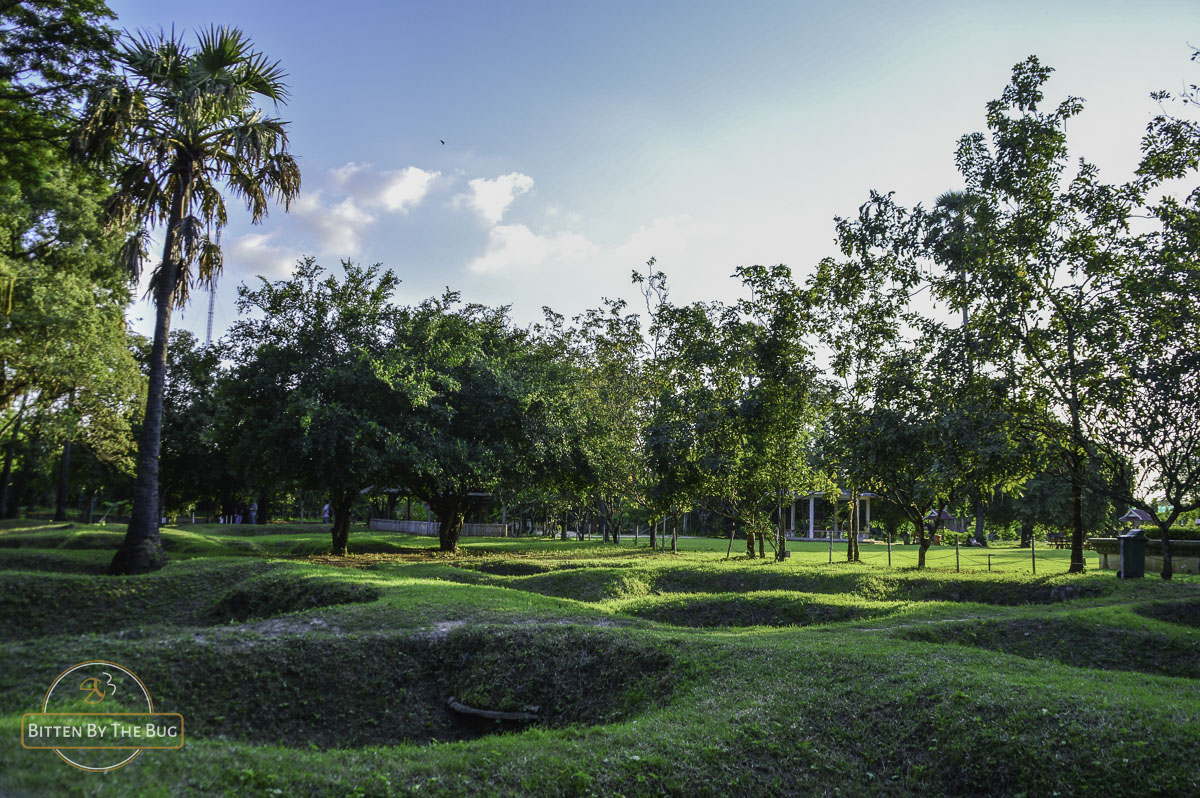 After losing lots of time to arrange our visa to enter Vietnam, we visited the Royal Palace and the two adjacent pagodas: the Silver Pagoda and the Temple of the Emerald Buddha. 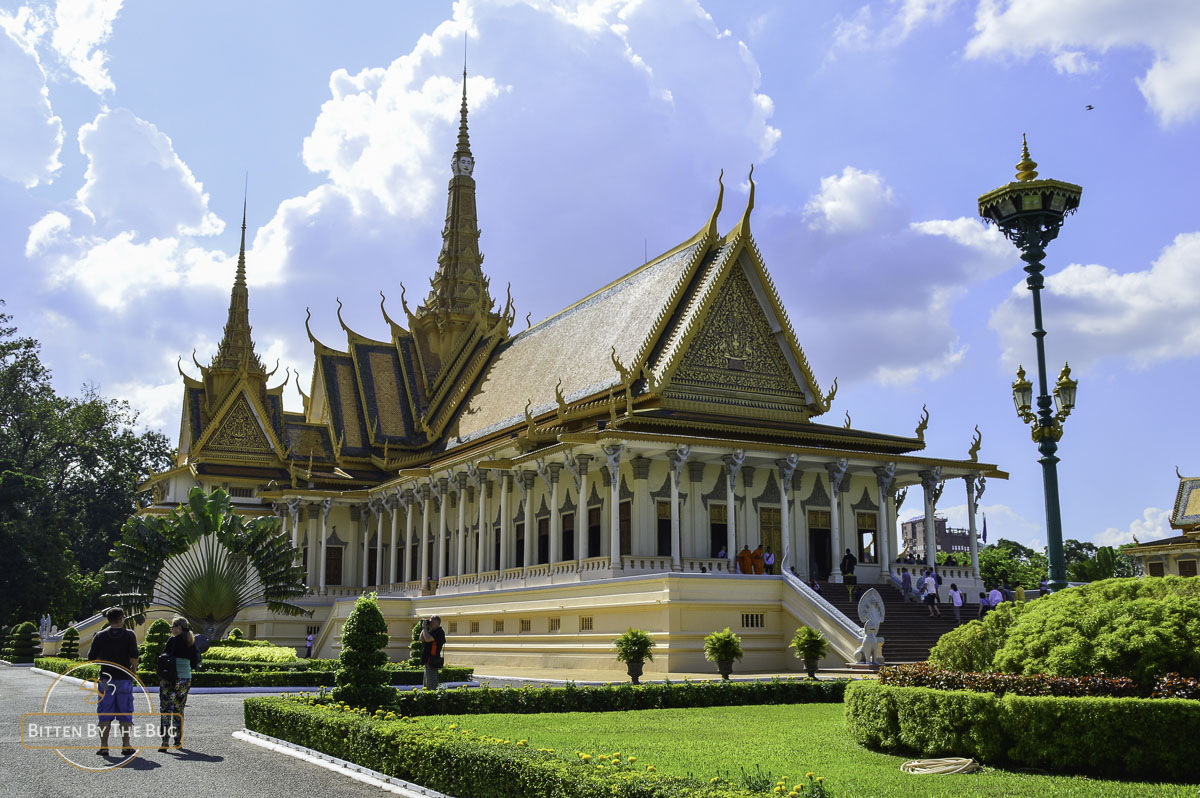 Bokor Hill Station (half a day)

• With our Couchsurfing host from Phnom Penn, we embarked on a motorcycle adventure to the Bokor Hill Station, a set of French colonial buildings constructed as a mountain luxury resort and retreat for colonial residents in the early 1920s. Today, the buildings are abandoned and dilapidated, although still photogenic with the scenic mountain landscape in the background. 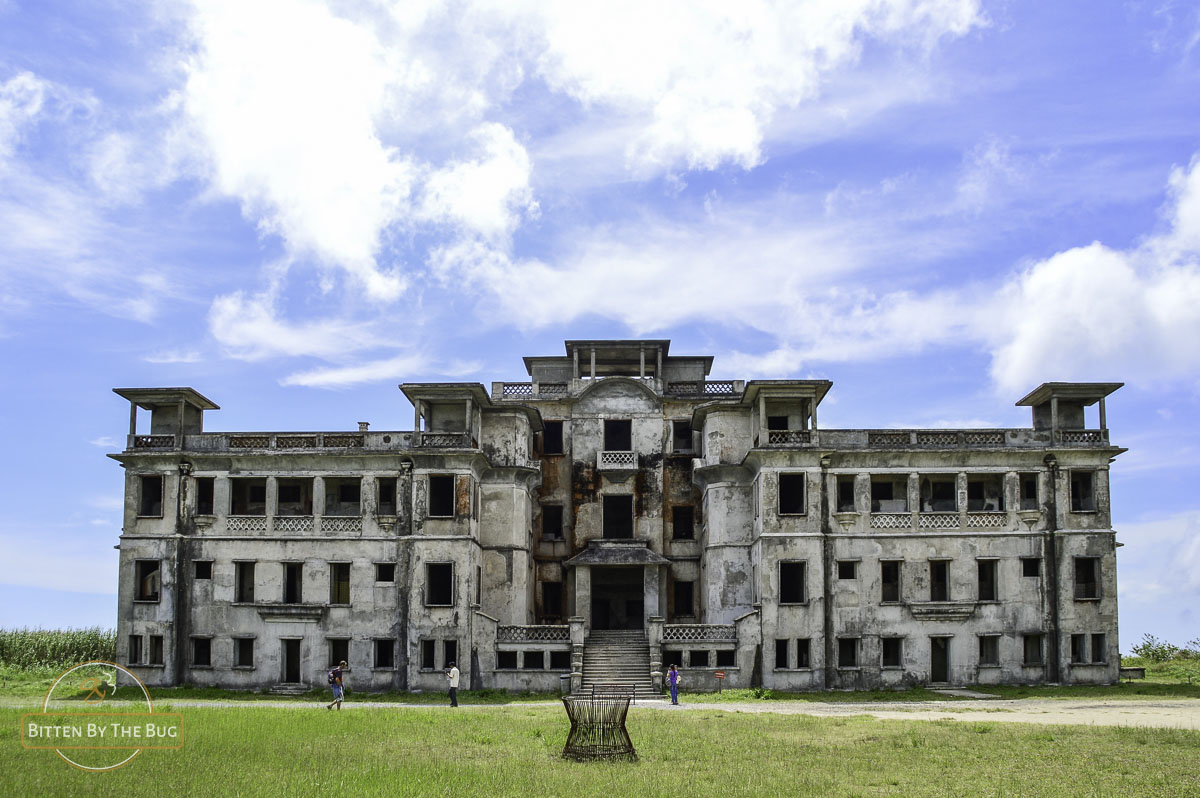 • In the afternoon, we drove on to the beach town Kep, which is famous for its crab. We installed at our host’s favourite beach restaurant where we were served a giant plate of crab and other seafood. Delicious! 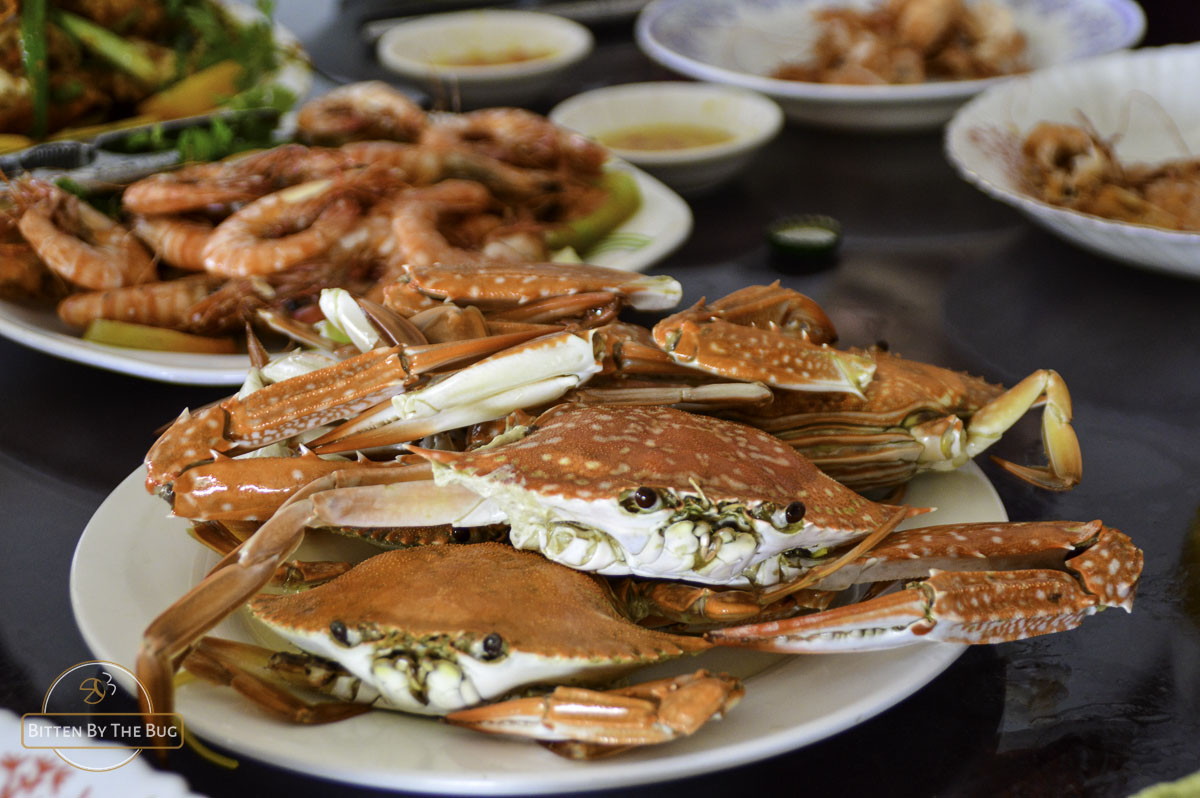 Kohrong is a small tropical island which you can easily reach by taking the speedboat from Sihanoukville. We enjoyed the laidback vibe of the place, the palm trees, the fresh pineapples and coconuts… Although it was tempting to install on a beach and not move again, we also undertook a hike through the jungle-clad interior of the island. On the other side, we encountered an empty picture-perfect beach. Definitely worth the hike! (Note: Not sure it’s still like that today, as they were about to build hotels on that side of the island too…) At night, as we went swimming in the sea, the water seemed to light up around us. It was caused by a certain type of plankton that lights up when in rapid moving water. Truly magical! 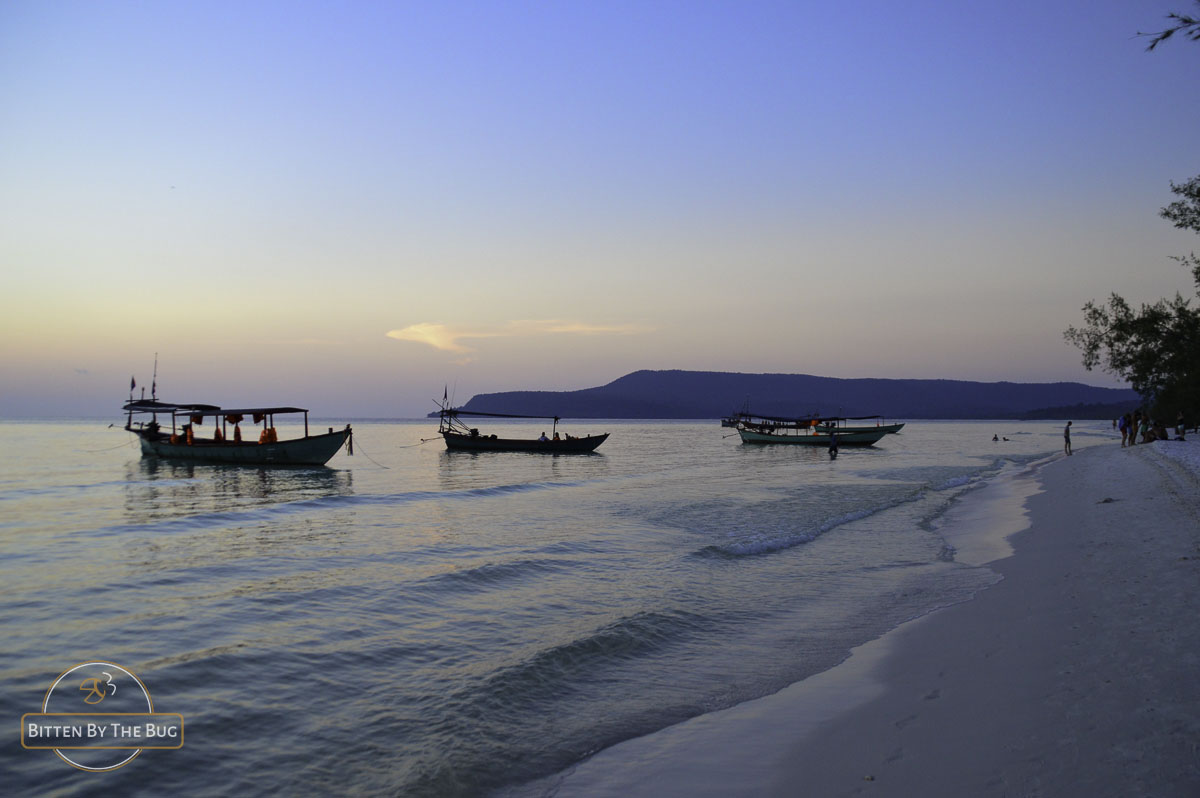