Where to picnic in Brussels?

One of my favorite activities in Summer is to enjoy the nice weather with a picnic in the Brussels parks. The good thing about Brussels is that it’s boasting so many parks and gardens that you never have to cover large distance for a patch of green. Nevertheless, not all parks are equally suited for picnics. Some of them like Botanique or Parc de la Reine Verte close early in the evening, when your afterwork picnic is just getting started. All the parks listed below, on the other hand, stay open until late and offer some cozy spots to settle for a picnic.

Situated on a hill, this parc offers a nice view over the downtown area of Forest which around sunset time becomes the scene of a romantic color palette. Do I still need to specify where to find the best picnic spot of the park? ;-) In the center of the park, a pop-up bar called La Guinuette du Parc de Forest, opens every Summer from April to September. Apart from catering food and drinks, they also organize various events like yoga, tai chi, concerts, karaoke nights…

How to get to Forest Park? Take tram 3 or 4 to metro stop Albert. 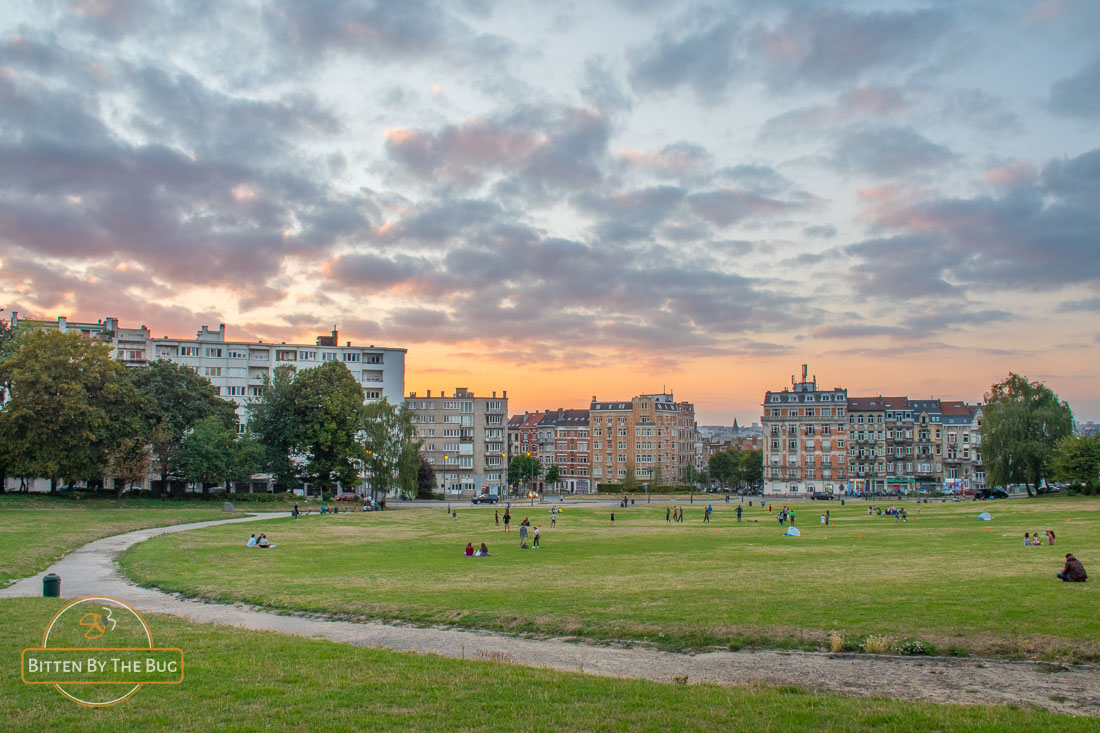 Equally situated in Forest, the Duden Parc looks and feels completely different from its small brother Forest Park. Thanks to its beech grove and dense foliage, the Duden Park feels more like a unexpected stretch of forest in the city. It covers an area of 23 hectares on a very hilly surface, with steep slopes culminating at 90 metres in altitude whereas the valleys drop to some 55 metres. Although this relief lends itself to long walks in nature, the northern part has been landscaped as a garden. And this is where your picnic gear comes in! This side offers a beautiful panoramic view of the city skyline dominated by the Palace of Justice. There is often a temporary guingette here as well. 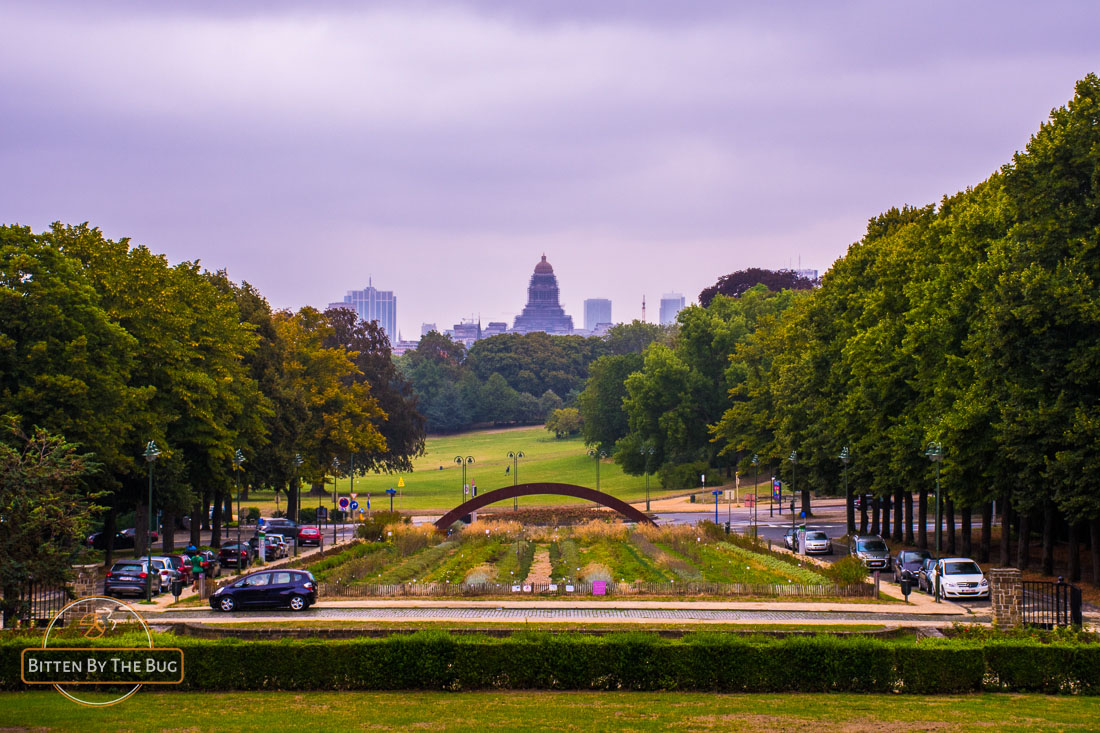 Dominated by the basilica of Koekelberg, the Elisabeth Park spreads out over the Koekelberg plateau. Originally, the park was meant to accentuate a huge pantheon that king Leopold II had planned on building. Although the surrounding streets (eg. Pantheon Avenue) still refer to that project, its construction was never realized. The layout of the park with its many grass lawns and shaded walking tracks brings to mind Parc du Cinquantenaire. A nice spot for a picnic is the large central landscaped garden where you can bathe in the evening sun. If you prefer some shade, get closer to the guingette of Bar Eliza and you might even enjoy some live background music while picnicking.

How to get to Elisabeth Park? Take the metro to Simonis. 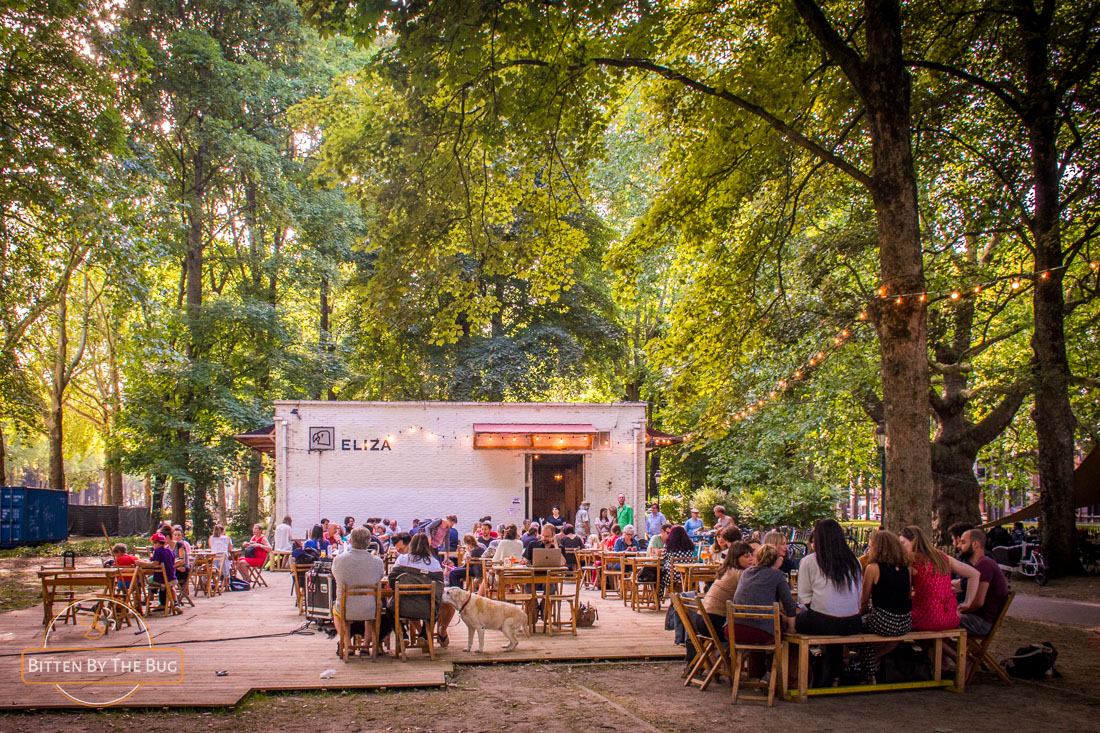 Leopold Park is situated in the European quarter, which makes it a popular lunch spot for people working in the European institutions. Its main feature is the large central pond, which is fed by the Maalbeek stream and inhabited by mallards, moorhens, coots, Egyptian geese… A small grass-covered hill leading up to the former Solvay library offers a lovely picnic area from where you can overlook the activity in and around the pond.

How to get to Leopold Park? Take the metro to Schuman. 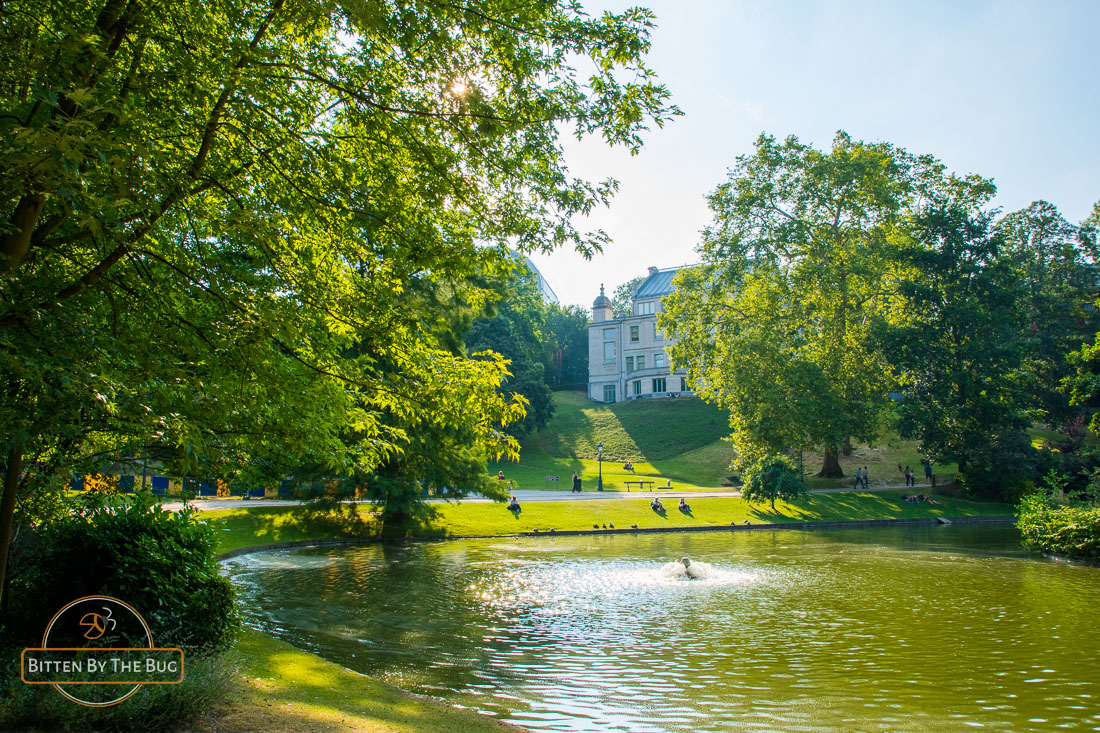 Launched as a sustainability project to sensitize the citizens to agricultural practices in the city, Parckfarm is now an integral part of the Tour and Taxis site. The artificial railway valley between Laeken and Molenbeek, covered by three bridges, is a nice piece of postindustrial landscape. Standing under the first bridge (pont du Jubilée), you will enjoy the captivating view over the skyline of the north district. The center of the urban park is Farmhouse, a greenhouse that sells local products and organizes various social activities. In Summer, a DJ often installs under the bridge, so lay down your picnic blanket somewhere nearby for a picnic in a funky vibe. 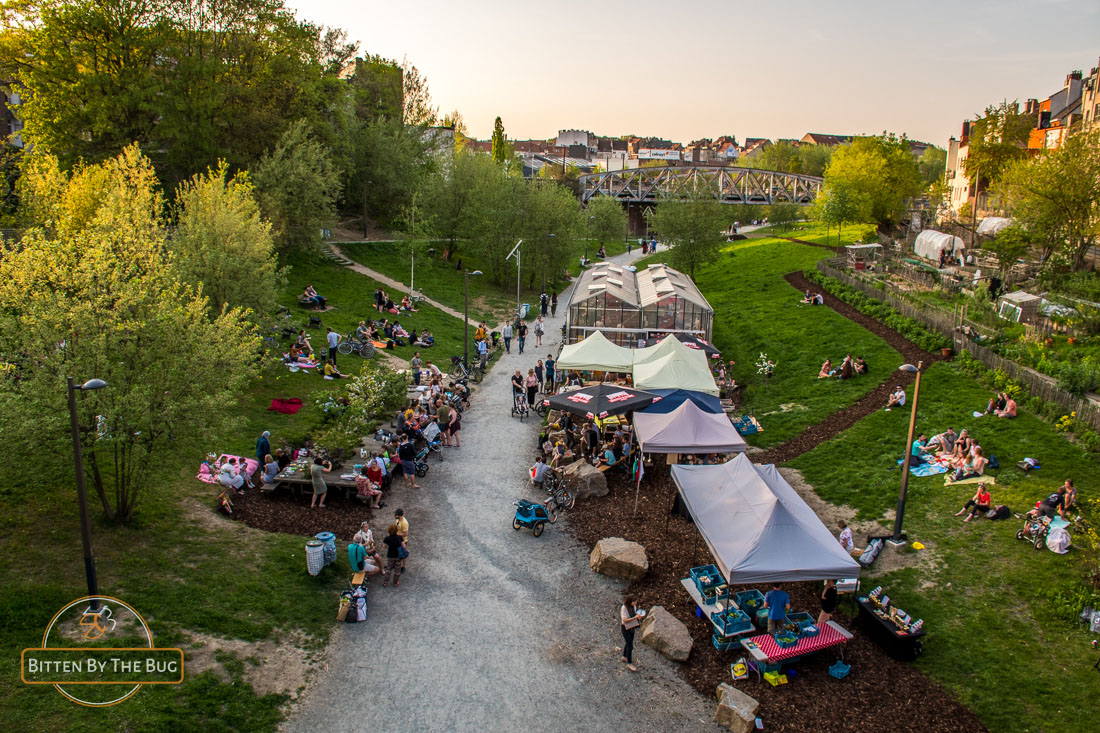 Park life in Josaphat Park in Schaerbeek culminates in Summer with a large selection of social and cultural events. Families, couples and friends gather here to enjoy a concert, take a stroll around the pond, sunbathe on the large lawns of the archery plain, look at the donkeys in the pen… When picnicking, it’s probably most convenient to stay close to one of the kiosks to get a regular refill of cold drinks. Or head to Josaphine’s, a little kiosk close to the donkeys pen, that sells ready-made picnic baskets which contain everything you might need for a picnic in style. 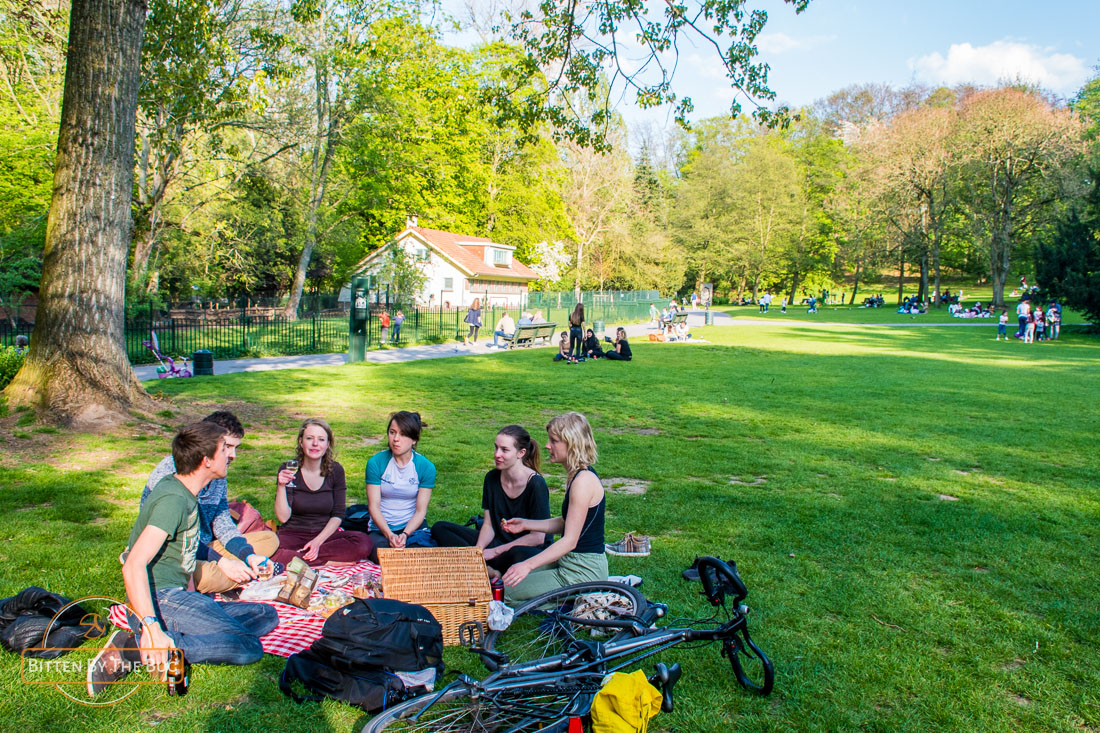 This is a large, pentagon-shaped park bordering the European quarter. It’s popular place for joggers as well as outdoor courses like yoga, aerobics and frisbee... There is plenty of space to install a picnic blanket, although the best spot is between the Arc de Triomphe and the metro stop Schuman. Not only does it offer a view over the fountain with the impressive triumphal construction in the backdrop. Around sunset you also get a majestic view of the sun going down between the arches.

How to get to Parc du Cinquantenaire? Take the metro to Schuman or Merode.

Facing the Royal Palace, this rectangular park is the one closest to the Brussels city center. Its main entrance though sits opposite the Belgian House of Parliament on the other side. If you enter from the main entrance on that side, you’ll pass a large fountain from where the three main avenues dividing the park converge. Scattered throughout the park, you’ll find several statues and outdoor theaters. While exploring the park, try to decide whether you prefer laying out your picnic blanket on a secluded, shady spot or an open space on one of the main avenues. Every Summer, the park hosts the yearly music festivals Boterhammen in het Park and Feeërieën, so you can even combine your picnic with a free concert!

How to get to Brussels Park? Walk there from the city center or take the metro to Parc. 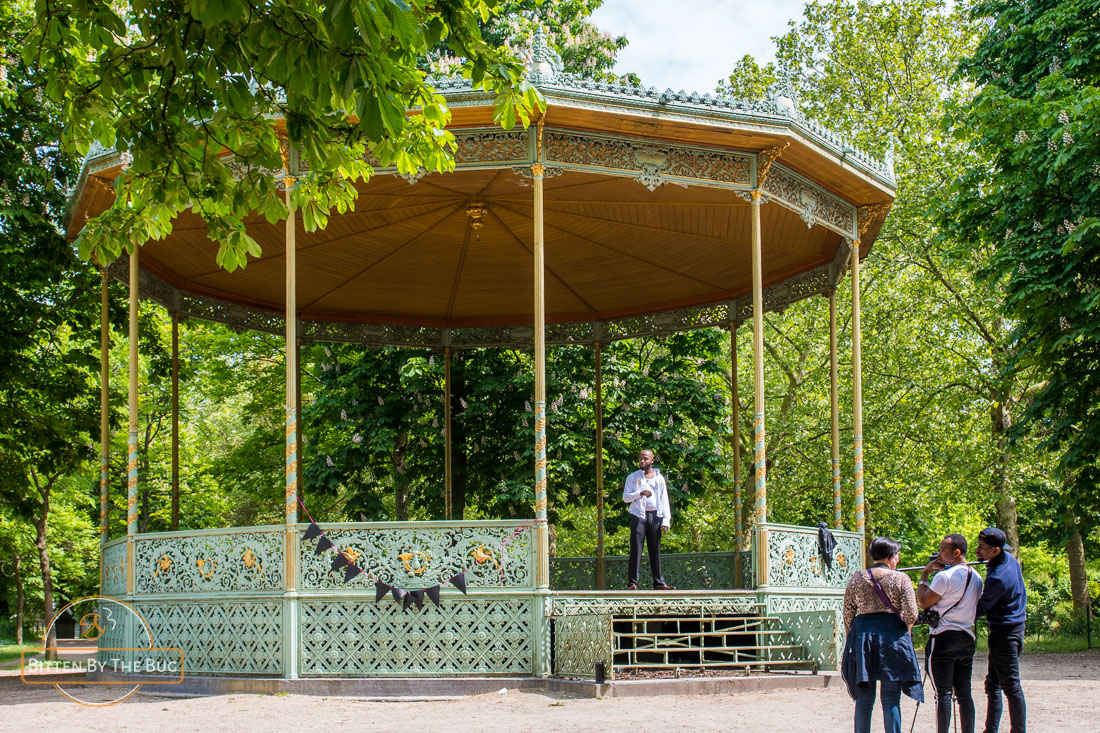 There’s something relaxing about water surfaces, which makes them a nice setting to sit and enjoy the peace. That’s also the main allure of the two large ponds stretching out between Place Flagey and the Abbey of La Cambre of Ixelles. The English-style site also boasts a set of sculptures and a recently restored large rockery with imitation rocks, ruins and a truncated column serving as a backdrop for a waterfall, the only feature of its kind in Brussels. The small houses surrounding the ponds look cute too. Walk around until you find the best spot for your picnic blanket. Afterwards you can always head to Place Flagey for drinks in one of the bars. 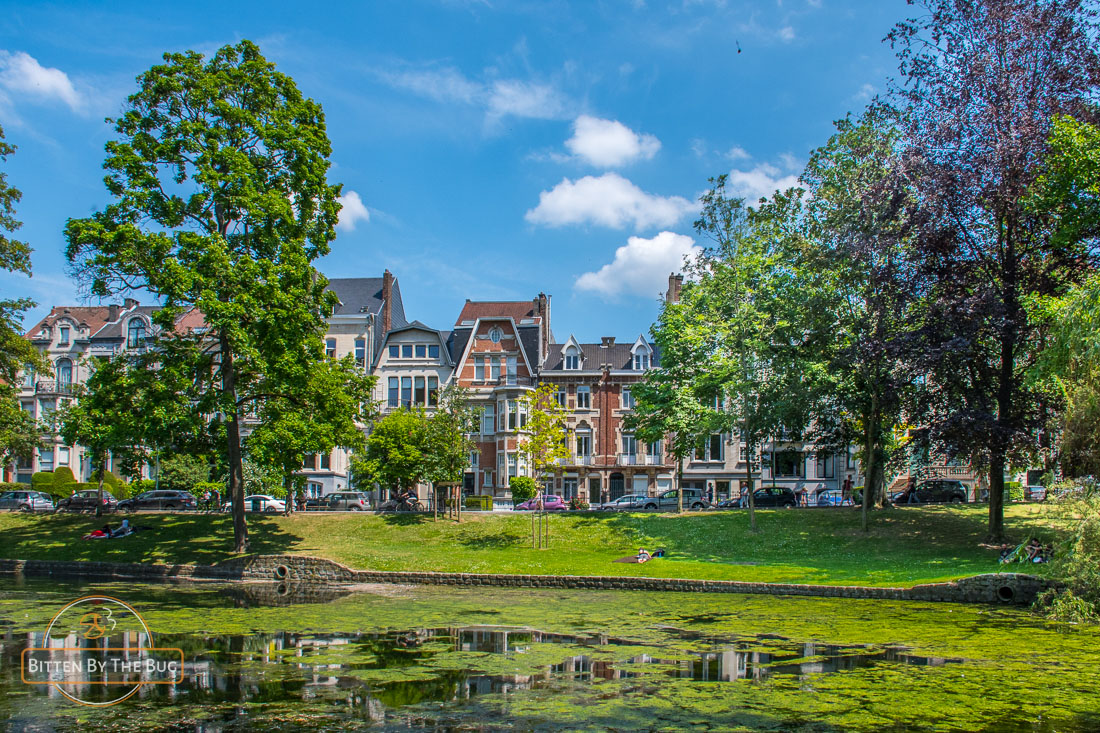 Bruxelles Environnement has launched an app that marks all the parks on the map of Brussels. Click on a park and you'll get lots of information like its history, fauna and flora, opening times... To install, visit the website Brussels Gardens, then save it to your home screen.