12 Places to visit on your first trip to Brussels

12 Places to visit on your first trip to Brussels

Is it your first time in Brussels? Are you on a tight schedule and wondering which are the main sights to visit? Below is a list of ‘must-see classics’ in order to know what Brussels is all about. If you start early, it is possible to visit all of these places in one day.

If you have more time and want to explore more original places, you can use this list as a basic checklist and complete it with some parks, restaurants, bars, viewpoints, museums…

Most of Brussels’ iconic sights are centered around the Grand Place. This beautiful square is surrounded by guild houses, the city’s town hall and the Maison du Roi. Did you notice that the City Hall is actually not symmetrical at all? And can you guess the professions of the guilds from the architectural details of the facades? Apart from being stunning, the square and its surrounding building reveal so much about the history of Brussels. It is no wonder that the Grand Place has been classified as a UNESCO world heritage site. 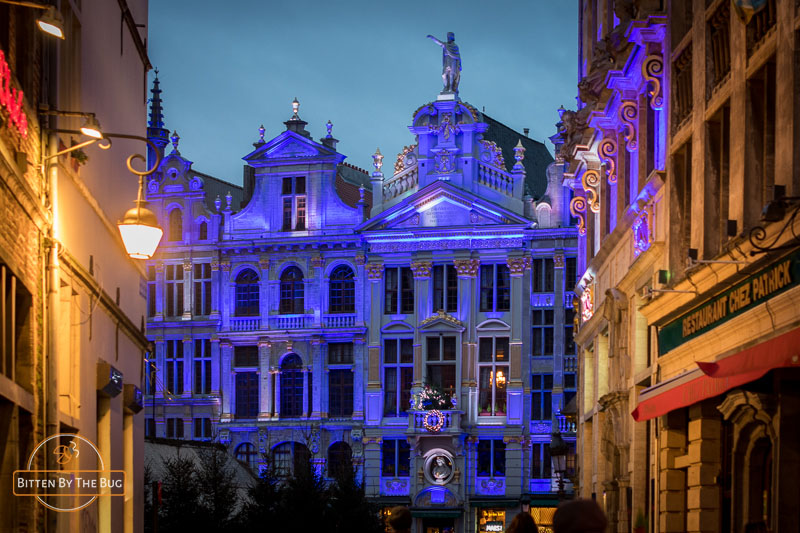 It’s only a stone’s throw to Manneken Pis, a small fountain of a peeing little boy. Although many legends are going around to explain why a peeing boy has become Brussels’ most iconic statue, the reason behind it is still unclear. One of the legends mentions a little boy who peed on a burning gunpowder fuse from atop the city wall, thereby saving Brussels from a large explosion and subsequent invasion. In any case, Manneken Pis is much loved in Brussels and is often dressed up in a different costume. In the Garderobe museum further up the street, his entire wardrobe is on display. 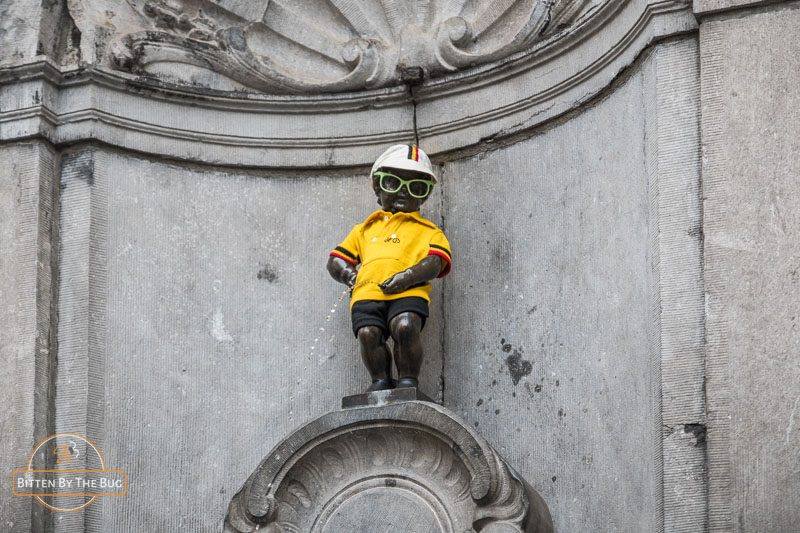 Situated on Boulevard Anspach, the Brussels Stock Exchange is an imposing building in neoclassical style. Its facade is brimming with ornaments and sculptures created by famous artists. Today, the building has been repurposed as an exhibition space and the stairs in front of the building are a popular meeting point for locals and tourists. They also make for an excellent tribune when street artists perform on the little square in front of it. 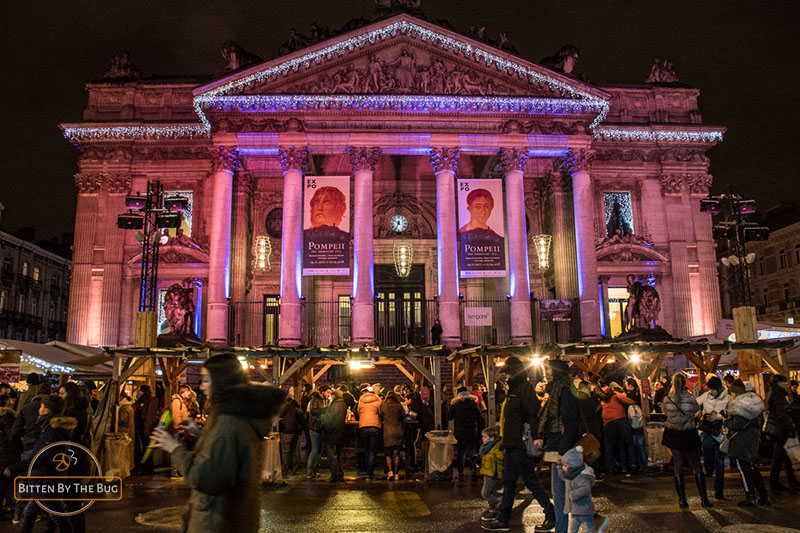 The Rue des Bouchers is part of the Ilot Sacré, a medieval network of small alleys in the center of Brussels. The area is characterized by its 17th century step-gabled houses, curly ornaments and old doors. Although the streets are lined with restaurants, these are basically tourist traps that you should better avoid. Nevertheless, it is a nice area to stroll around. It’s also home to the peeing statue Jeanneke Pis and the famous beer bar Delirium, with over a thousand different beers in stock! 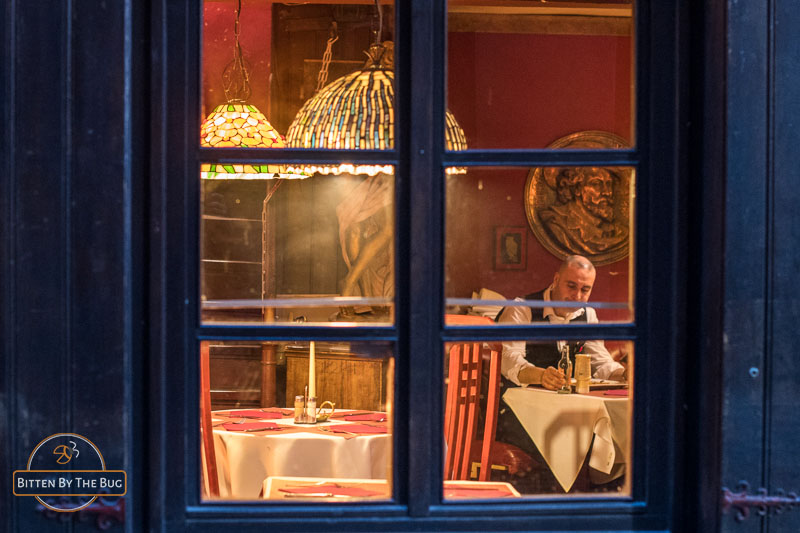 This prestigious ensemble of shopping arcades was built in 1847 as one of the first shopping arcades in Europe. This 200-meter long complex houses some of the most famous Belgian chocolatiers, fancy boutiques and the exceptional bookstore Tropismes Libraires. Although most of the products for sale are quite expensive, it’s still nice to wander through the galleries while marveling at the architecture and doing some window-shopping. Did you know that the first Belgian praline was created here? Originally a drugstore, Neuhaus tried to improve the taste of the medicines by enveloping them with a chocolate layer. After a while, they substituted the medicine with a sweet filling and the praline was born! Apart from Neuhaus, also Leonidas and Marcolini have opened a chocolate shop in the Galeries Royales. 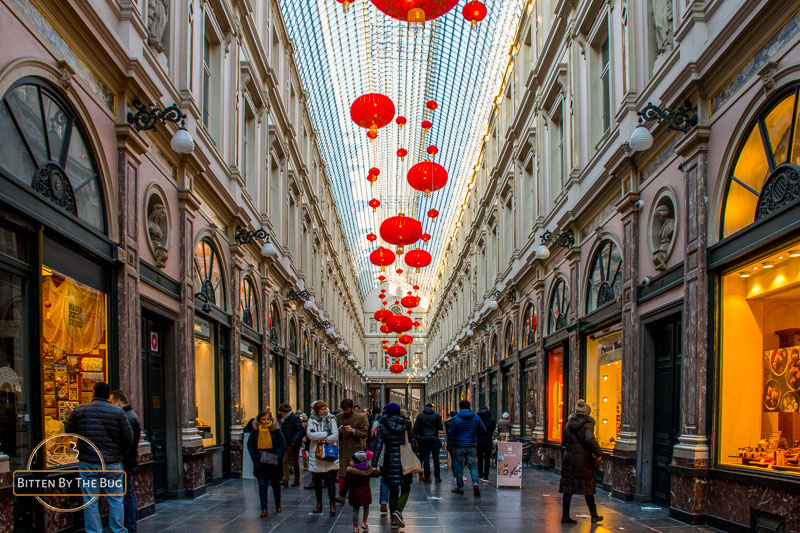 Originally a luxurious Old England department store, the Musical Instruments museum is a unique display of Art Nouveau architecture. Today, the museum houses an impressive collection of over 1100 historical and modern musical instruments. If you’re not that keen on visiting museums, you can head straight to the rooftop for free with the vintage elevator and take in the view while having a drink in the rooftop bar. 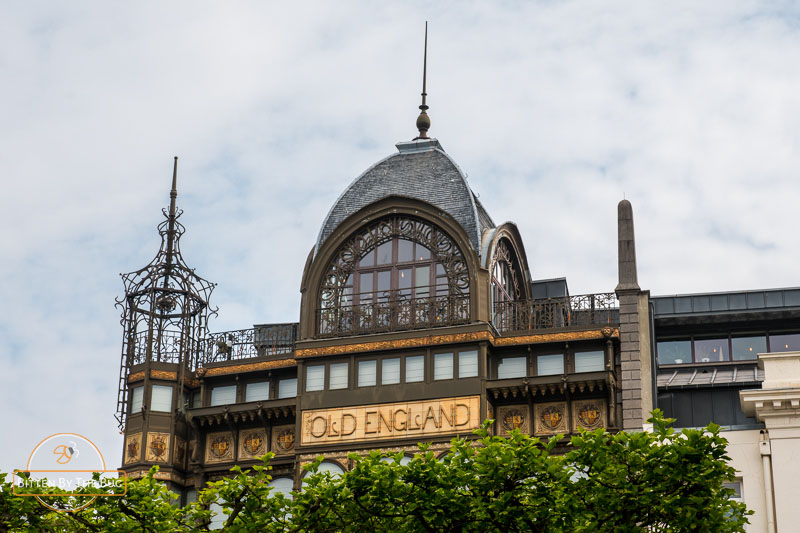 Walk up the steps to Mont des Arts for a breathtaking panoramic view over Brussels. From here, you’ll look out over the Grand Place, the city’s town hall, the Atomium and the Basilica of the Sacred Heart. Try to come around sunset, as the place turns truly magical when the sky is painted with pink and orange shades. 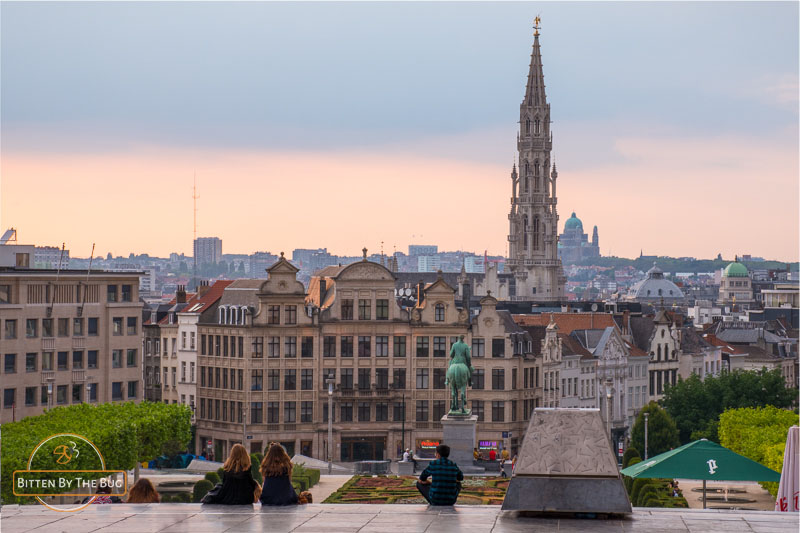 Located right across Parc Royal, the Royal Palace is the king’s administrative residence and main workplace. This is where heads of state are welcomed and court ceremonies are held. The Belgian Royal family doesn’t live here though, as they have another palace in nearby Laeken, which some beautiful Royal Greenhouses adjoining it. Whereas the latter cannot be visited, the royal workplace opens its doors to the public for a couple of months every Summer. Try to plan your visit accordingly and explore the wealthy rooms of the Royal Palace for free. 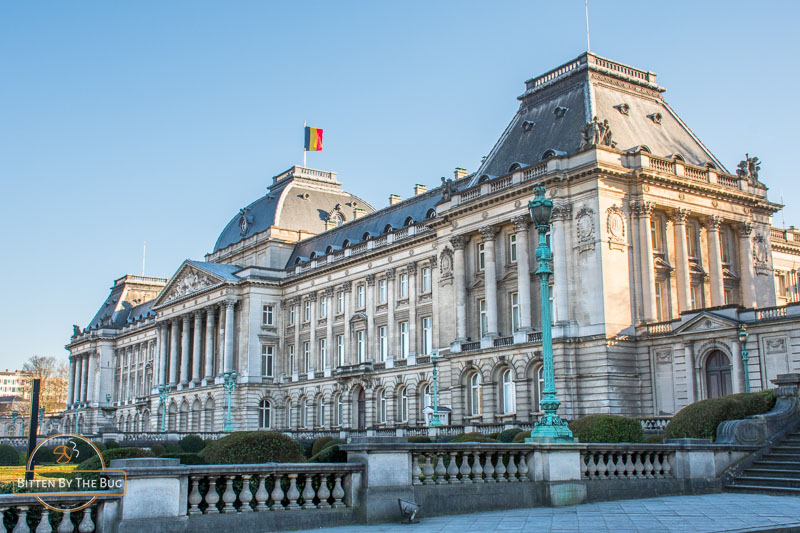 After exploring the downtown historic center of Brussel, head to the historic upper part of Brussels known as Sablon. It is made up by two squares referred to as respectively Grand Sablon and Petit Sablon. The beautiful Church of Our Blessed Lady of the Sablon towers over the neighborhood which are characterized by antiques, Belgian chocolate and art. Also the little garden opposite the church is worth exploring. It’s teeming with statues referring to the history and guilds of former Brussels. 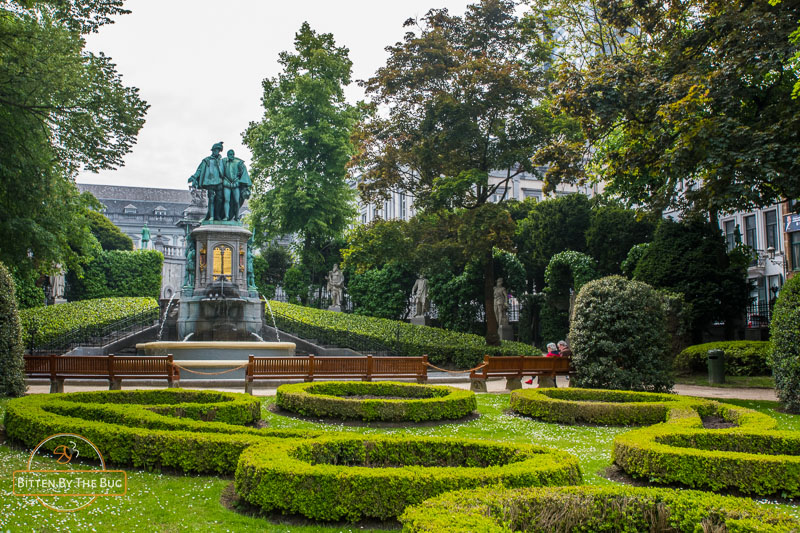 Place Poelaert is dominated by a giant edifice covered in scaffolding, also known as the Palais de Justice. Built in the 19th century, this behemoth is the most important court building in Belgium. The scaffolding related to its renovation has been there for many years and rumors are that it’s become impossible to remove them because they’re needed to support the building. Anyways, even with its flaws, it remains an impressive building, both on the outside and on the inside. You can enter for free to explore the main lobby area and marvel at its dramatic architecture. From Place Poelaert then, you have a beautiful panoramic view over Brussels, with the Atomium in the distance. 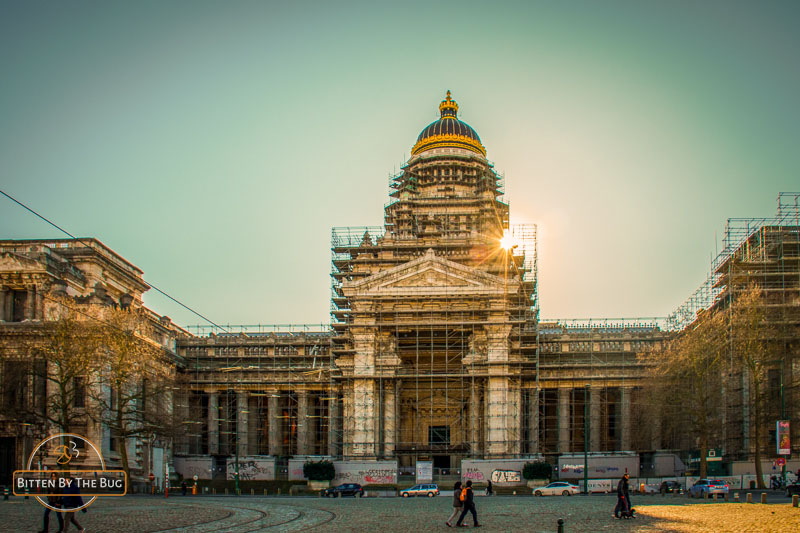 The Atomium is one of the most iconic and exceptional attractions in Brussels. Built as a temporary monument for the 1958 World’s Fair of Brussels, the nine shiny spheres of the Atomium depict nine iron atoms and symbolize the scientific progress. A photo album of Brussels isn’t complete without a selfie in front of this national landmark. For a fee, you can enter the Atomium, whizz through its tubes by taking the futuristic escalators, check out the temporary and permanent exhibitions, and enjoy the 360-degree panoramic view from its highest sphere. Every Summer, the park around the Atomium is also the setting for the Feux de Laeken a spectacular fireworks. 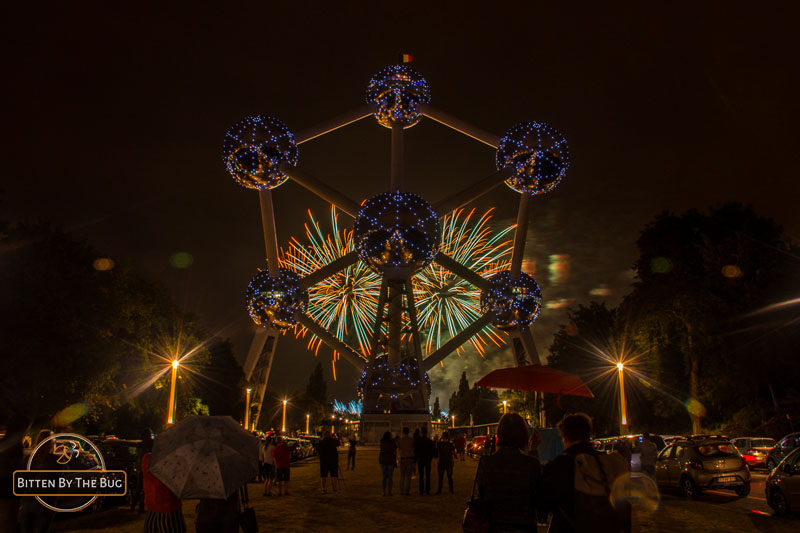 If you still have some time, head to Parc du Cinquantenaire which borders the European Quarter. Built in the shape of a pentagon, the park was built during the reign of Leopold II in honor of the 50th year since the Belgian independence. In the center of the park you’ll find the Arcades du Cinquantenaire, a monumental triple arch that houses three museums: Autoworld, an art museum and an army museum. Via the army museum you access the top of the arch for a nice view of Brussels and more specifically the European Quarter. 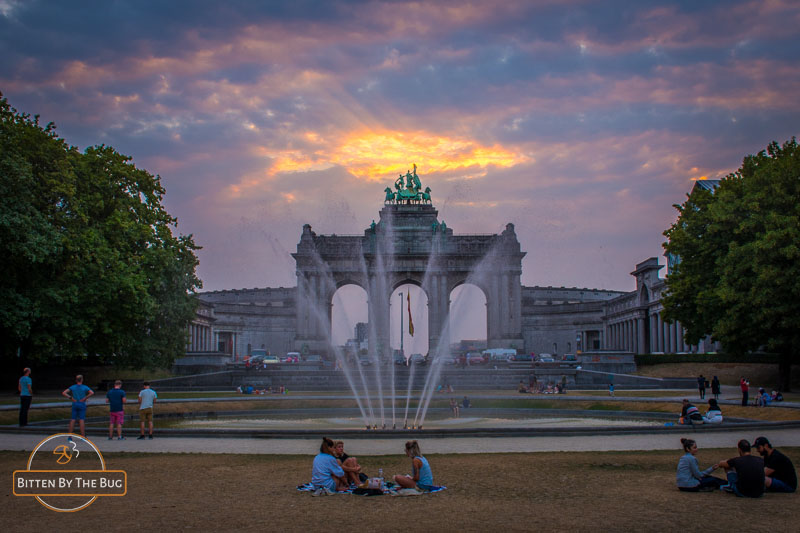